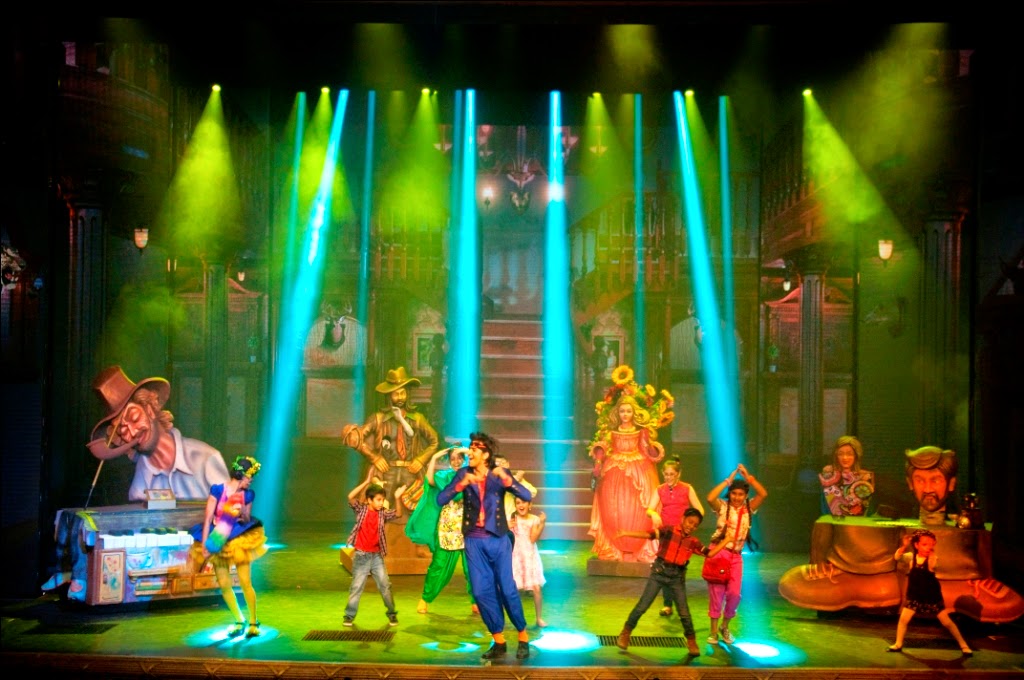 Sorcerers and Sorceresses! Magic potions and evil designs! Kingdom of Dreams India’s only live entertainment destination launched its third musical fantasy on stage for children and families called. Adapted for stage from a story by Roald Dahl the magical musical set in a mad wonderland sends delicious shivers down the spines of its rapt viewers.
The story unfolds in the funny Poo Pot Hotel where each of the objects springs to life on just a touch. The Piano ‘Man’ plays by itself, the Lady Vase springs arms to give a hug and the Reception Desk Mr. Kake and his wife Sunita, The Chair, love to tease and delight! In this madcap world descend the scary, funny, ugly witches and wizards, Wizwits, to hold their annual conclave RSPCC. Their visit coincides with the arrival of a group of children with their rather silly and stylish mother, at Poo Pot Hotel for a vacation. The loathsome Wizwits who detest children hatch a bizarre plan to destroy the children of the world by feeding them chocolates filled with a deadly poison DAMM (Delayed Action Mouse Maker!) and turn them into Mice.

However the smart children plot revenge on the mean, old Wizwits and with the help of the headless Wizwit, Tula and their loving mother outwit these scary creatures by feeding them with the dreaded DAMM and instead convert them into Mice. Good triumphs over Evil!
Through fun n’ frolic, song and dance, the delightful show keeps the audiences glued to their seats with its grand presentation and mesmerising props. Scripted and Directed by two of the most well known theatre luminaries of India, Lushin Dubey and Bubbles Sabharwal, takes the young viewers and families through an edge of the seat roller coaster ride in which a fantasy world peopled with fantastical and magical sorcerers and characters comes alive!
The mesmerising  is the third in the series of spectacular stage shows produced by Kingdom of Dreams. Zangoora, The Gypsy Prince, the world’s biggest Bollywood musical on stage has crossed landmark 1300 shows, Jhumroo, Jhoomo Nacho Gao, the musical comedy celebrating the spirit of Kishore Kumar has completed a spectacular 700 shows and now with the entertaining musical  Kingdom of Dreams takes its viewers into another magical realm inhabited by deliciously scary and funny fairytale characters that fly and punch and rant and rave in a timeless tug-of-war between the Good and the Evil.
Speaking on the occasion Mr. Viraf Sarkari, Director Kingdom of Dreams, said “We are proud to launch our second venue ShowShaa theatre and Wizwits our third musical inside Kingdom of Dreams. It was always our dream to create different entertainment options for our visitors. With Zangoora, Jhumroo and now Wizwits the Kingdom of Dreams truly presents a variety of leisure choices for its patrons and guests. I am sure the viewers will thoroughly enjoy themselves as much as we have enjoyed producing this wonderful show for the children and families.”
Says Mr. Anumod Gagan Sharma, “After producing the successful Bollywood musicals on stage, Zangoora and Jhumroo, we wanted to produce a different show which could be primarily enjoyed by children and families. Wizwits is effort in that direction. This delightful musical fantasy with its magical elements is sure to entertain the audiences and keep them coming back for more.”
Based on the story, The Witches, by Roald Dahl, adapted for stage by Lushin Dubey and Bubbles Sabharwal will play at ShowShaa Theatre from Tuesday to Friday at 6:00pm and Saturday and Sunday at 12:30pm and 6:00pm each on weekends.
About ShowShaa:
Kingdom of Dreams has introduced ShowShaa Theatre, a grand, state-of-the art MICE venue in the country which addresses comprehensive needs of the business industry that can combine business with pleasure. A first of its kind and a unique concept in India, ShowShaa can be a 250 seat auditorium in the day for corporate functions. On the touch of a button its automatic recessing seats can transform it into a banquet hall in the evening for social functions and a glitzy high energy night club on the weekends. Armed to the T with a 60 by 40 ft stage, complete with revolves, hydraulic stage lifts, fly bars, Kirby flying systems, state of the art light effects and live size LED walls that create a 3 D effect, the options created by ShowShaa will infuse a breath of fresh air in meetings and conferences and provide an exciting alternative to break the dull boardroom monotony. The world class aerial systems also enable options of a grand entrée on stage of the presenters and key management during an event. Projection screens on left and right walls of the stage can be used for corporate presentations and AVs.
This unique concept at Kingdom of Dreams has now created a cluster of venues inside the magical Kingdom of Dreams where artistry, grace and entertainment combine to add lustre and excitement to dull business meetings and corporate affairs! 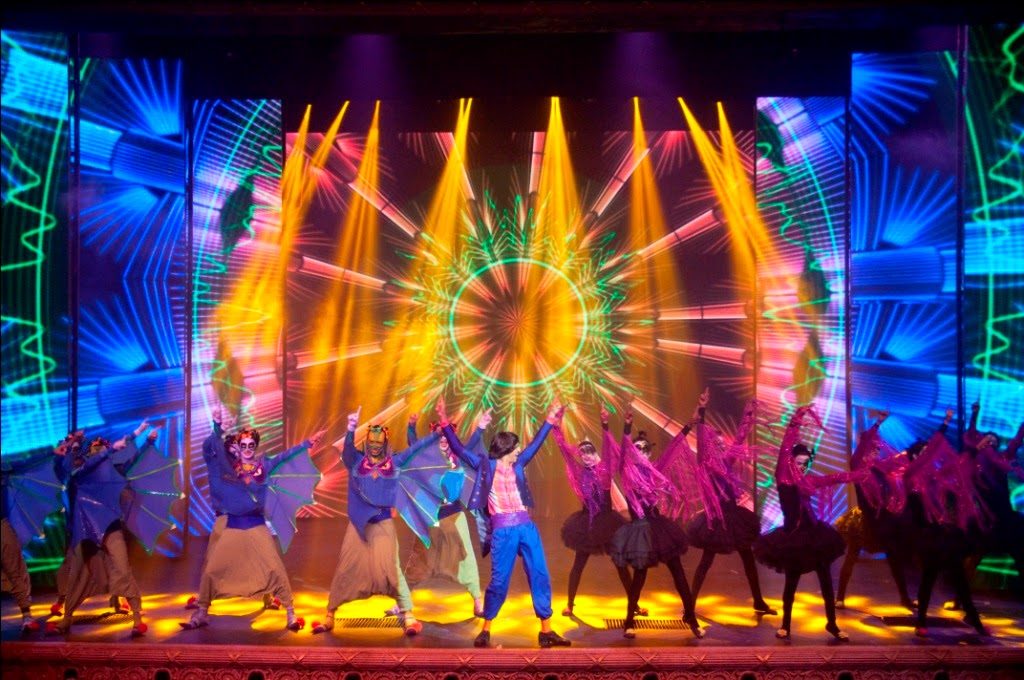 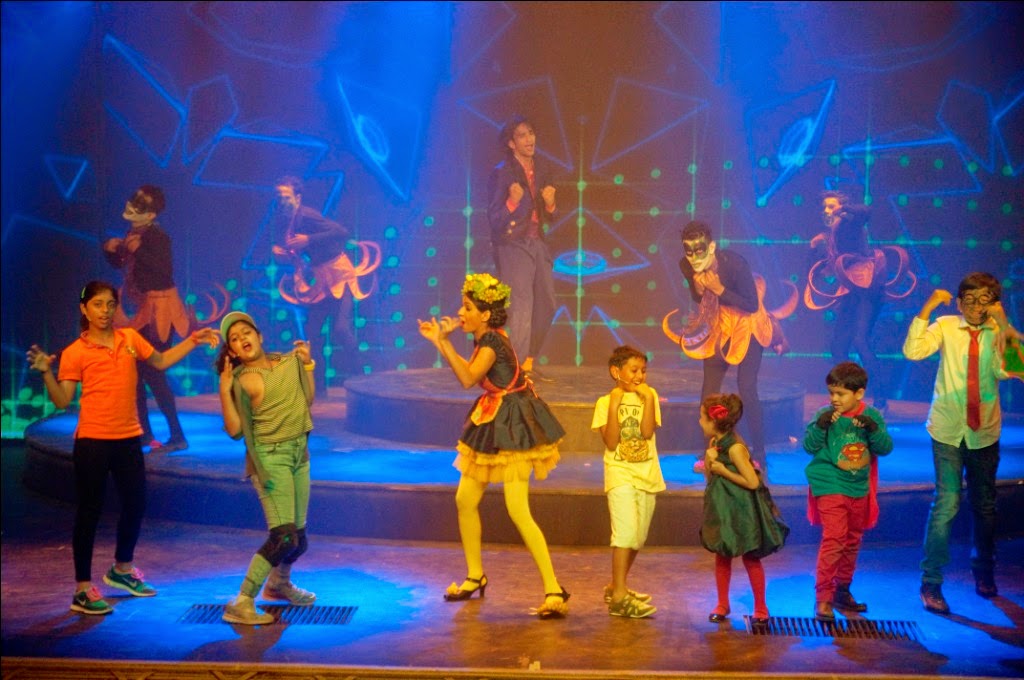 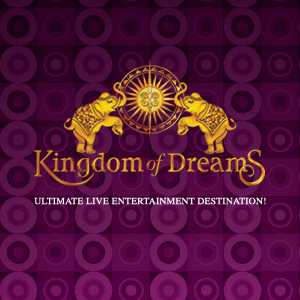